Quest of the Demon - Out Now! 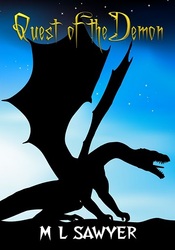 Darci is your average every day sixteen year old girl who plays basketball and lives in an ordinary country town.  Her life changes forever as she is 'accidentally zapped' to the land of Nahaba by the apprentice wizard Taslessian.

Within hours of her unexpected arrival, both teens are thrust into a dangerous journey to the cave of Grisham the Great, who will hopefully be able to send her home.  When they get there however Darci soon finds out that there is no such things as accidents and that their journey is only just beginning. 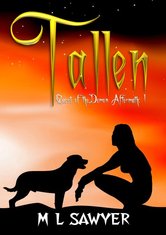 Growing up not far from the road to Chinta on the edge of the Jungle Dragon, Tallen is excited to have her two brothers home.  Recent times have been hard, Tallen herself barely surviving an attack by a derelict stranger in their very own barn.

The war that never was has relieved them of their duty at Chinta so much so that her father, the Sergent of the Guard is able to return for a visit, bringing news  of a possible suitor for Tallen considering she's almost of that age.

Tallen is not sure what she wants, but the man her father brings home was not what anyone expected.  At least she knows that her family always have her best interests at heart when the pompous, self interested, merchants son is sent back to Chinta.

Such a trivial meeting develops into a  journey that throws Tallens life into turmoil and sets her on a path of which there is no return. 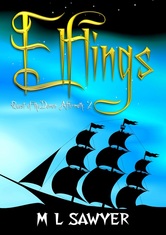 Elonan opened a single eye at the noise being made outside his icy cold room at the backwoods inn at some ungodly hour at night only to find that their ship has been hijacked and that he, along with the rest of the Elspeths crew, are now stranded in Menarik.

Of all the icy, out of the way places...  It was their fault, it had to be, the group of five that had been part of their cargo.  He had known that they were different.

No ship is due for weeks so Elonan has nothing better to do than to try and find out what happened.  A question that he will wish that he had never asked.

Brothers Olay and Ulav hail from the north.  They are taller than most, and stronger than all – at least according to Olay. They sail the oceans on the Nightrider, transporting contraband, fending off hijackers, and meeting the strangest of people. It's an eventful lifestyle: drinking, brawling, women, and, in Ulav's case, one woman in particular, whom he only recently met.

Their regular routine of sail, avoid the tax ports, and deliver cargo, is abruptly interrupted when Elonan arrives unexpectedly with a real, living elf as a travelling companion. There is evil afoot, he tells them; a friend is in trouble, and a daring rescue must be planned, would the brothers would care to assist?

An adventure so great would be the talk of storytellers across the land?  Of course they agreed!

If only they had known what they were getting themselves into...

Julian has a simple life travelling with his troupe of acting companions, making their way from town to town and telling their tales. Such is his acting talent, seldom do the audience guess that he has more than one role to play.

Eventually they make their way to Buran, a mining town full of men very keen to see the Merchant’s Daughter, their current production. All goes well, the curtain draws to a close and Julian changes back to his alter-ego, Loretta to receive the applause from the crowd. It is not until later that night, when three gentlemen callers happen upon Julian, that his secret is discovered and he is set upon in the darkness.

Forced to flee the profitable town earlier than planned, Julian believes his troubles are over. Yet the road they travel is unknown and his companions fall silent. A whisper on the wind catches his ears... “Give in, give in, give in...”

Not even in his darkest nightmares could he ever have imagined the dire situation he was to find himself in.

Click! Matrone discovers he can think again. His consciousness has returned! How he could possibly be alive after such a fight he has no idea, but alive he is... or so he believes…

Following on from the Quest of the Demon Aftermath, Matrone’s story takes a different path. It is a tale of darkness, a story following the path of evil, as the silence continues to rise…

The seventh novel in the series, the conclusion is yet to be written, the outcome still undecided.